The Residences at Canalside

The Residences at Canalside was constructed on what had been the site of Fairport’s Department of Public Works (DPW) for some 75 years. After the DPW moved to a new location in 2007, the vacant parcel was purchased by the Village of Fairport’s Office of Economic Development (OCED), which began searching for a development proposal that would provide many benefits to the Canal-front community.

Challenges certainly existed. The long-time use by DPW meant environmental remediation would be required, and the relatively small size of the site might also limit options based on economic considerations. On the plus side, the Village location meant basic infrastructure was in place, and OCED worked with the State of New York to construct docking and other public improvements along 300 feet of the Canal frontage. OCED also contracted for the environmental remediation.

OCED is proud to have had the opportunity to take the lead for the initial investment that made this project a reality: to position a significantly distressed yet extremely visible property by leveraging public-private partnering to meet the housing needs in the heart of the Village.
—Kevin Clark, Board Chair; Village of Fairport Office of Community and Economic Development (OCED)

Development of the property represents a textbook ‘infill’ project opportunity, the type that is becoming increasingly prevalent in many communities in order to accomplish site development that may not otherwise be possible. Riedman Development proposed an upscale residential use, which meant that the existing utility connections and easy walking to Fairport’s business district were highly attractive development considerations. The Erie Canal has become increasingly popular as a recreational amenity, and perhaps no community has leveraged that reality more successfully than Fairport. However, perhaps the most limiting development factor was the relatively small size of the existing parcel. Our client determined that a buildout of 48 condominium units would be necessary to make the project economically feasible. To accommodate that buildout, the only way to go was up, and the building height would have to be greater than what the Village Zoning Code allowed. On-site parking for condo-owners and guests, as well as outdoor gathering space for social interaction were additional programming priorities that were critical to incorporate into the development plan. An approval for the proposed building height would be a deal maker.

Making The Residences at Canalside a reality took a great deal of thought and ingenuity.  BME was an important member of the development team which created a residential community that complements and enhances the character, fabric, and vibrancy along the Erie Canal in the heart of the Village of Fairport. The community has achieved tremendous success in selling out in two years.

To find the best approach to move forward, we actually went backward – back nearly three decades to when the Village of Fairport established a local law that created Incentive Zoning (IZ). In its simplest terms, IZ allows the Village Board to grant waivers to Zoning Code standards, such as building height, in cases where the resulting development can offer significant benefit(s) to the community.

The Village Board clearly saw the many benefits to our client’s vision:

For one thing, while all 48 of the resident units had views overlooking the Canal, initially, there was no designated private outdoor greenspace for the individual units. Our solution – to develop the area between the building and the waterfront as a gathering space for both small and large group interactions. This approach included some hurdles, too, including erosion control of the sloped area between the private resident space and the public access along the Canal. 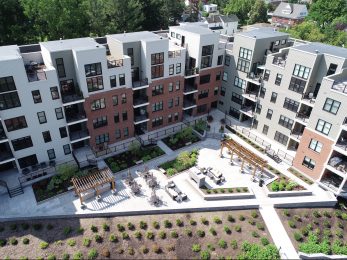 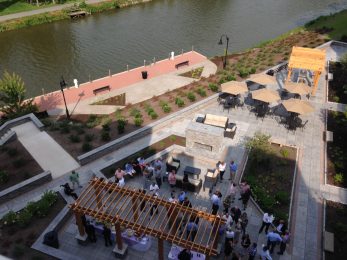 The project has a beautiful, undulating shape and roof decks that successfully address the water frontage.
– Panel of Judges; National Association of Homebuilders

Using excess fill material from earthwork operations, the entire courtyard was designed to be at the same elevation as the first floor of the building. In addition to creating a useable “front yard,” the fill effectively shielded from view the lower level parking garage. 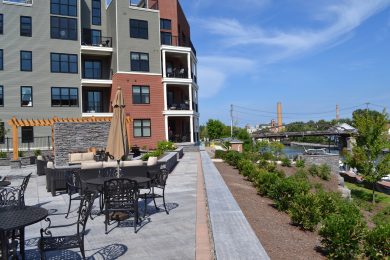 Residents can easily take a short walk along the Canal towpath to the Village. The visually appealing 300-foot promenade on the Canal, also designed by BME, was funded by a matching grant between New York State and Fairport’s Office of Economic Development (OCED). BME worked with the State DEC, the NYS Thruway Authority, and the US Army Corps of Engineers to help OCED receive granting funding and approvals for the project. A key factor in the state’s consideration of the proposal was the public-private partnership between the Village of Fairport, OCED, and significant investment by a future developer from the private sector.