“We are extremely proud of Kyle and of all of our employee’s ability to prepare mapping with function and flair,” States BME’s Survey Department Manager, Dave Zacharias, “Winning a statewide and national mapping competition is awesome for sure, but gaining faster approvals because of our ability to express design ideas clearly to boards and agencies is what we work very hard at for our clients”

Each year the NYSAPLS and other state professional land surveying societies open the contest to surveyors all over the State for categories ranging from subdivision, boundary and topographic mapping, to ALTA and lot surveys. Winners from the state societies are automatically entered into the NSPS mapping contest for national recognition.  Judging criteria is based on innovation in layout, interpretability, presentation, applicability to typical client or persons using this type of map, neatness and accuracy of scale.

An historic parcel of land for a legacy landowner that’s stood the test of time
The winning plat was for survey work BME completed for the subdivision of a historic piece of Lake Ontario water frontage in the Town of Williamson, in Wayne County. The land had been owned and cared for by the Cornwall family since the early 1800’s when two Cornwall brothers first settled and began their family’s life in the Hamlet of Pultneyville. Over time, the land became home to acres of apple orchards, beautiful woodlots, farm fields, wetlands, and provided stunning views of Lake Ontario. The Orbaker family, another legacy landowner in the Town of Williamson, also contributed to the farming and heritage of the Cornwall land over the years, leasing apple orchards from the Cornwall’s, for their family-run Fruit Farm on the shores of Lake Ontario in Williamson.

With the remaining Cornwall descendants now living throughout the US, the decision to sell portions of the land was made. After much deliberation, the Cornwall family negotiated the sale of 74 acres of water front land to the Genesee Land Trust to be preserved for public park access, ultimately becoming a destination for tourism in the community to explore and relish along Lake Ontario, a vision that will truly honor the Cornwall family legacy. In addition, 254 acres of the land was sold to the Orbaker family who continue to farm the land for their thriving Fruit Farm business.

Long term estate subdivision planning for all
BME’s survey department was retained by the Orbakers who previously worked with BME and eventually worked with all parties on the subdivision of the overall property. As communications about how to divide the land began, it quickly became apparent to all parties that the multiple objectives for this project were more complex than those typically encountered in a real-estate subdivision project. Numerous meetings and communications were required in establishing the new land parcels to be acceptable to all parties. The Genesee Land Trust desired a significant woodlot adjacent to the Lake to be included with their portion of the property, while the Orbakers’ priority included the ability to efficiently manage the property, particularly during the apple harvest season. Since the contracted parcel size for the Genesee Land Trust was specifically 74 acres, any variation to the metes and bounds of the lot affected all other parcels. BME’s survey department utilized their state of the art survey technology, a combination of methods, and their expertise to complete the survey and subdivision map that both the Genesee Land Trust and Orbakers’ agreed upon.

Plans are currently under way for the Genesee Land Trust in raising awareness and identity for their land, which will include public use and access, and preservation of the sites natural beauty and wildlife habitat. Moderate site improvements are needed to fulfill the vision of the owners and infrastructure planning for the future trails network and wildlife viewing areas are also being assessed. And for the Orbakers, it is business as usual as the family continues to maintain their orchards and farming as they have for decades before.

The Board of Directors of BME Associates D.P.C. are pleased to announce the promotion...

Michael Bogojevski Elected to BME Board of Directors 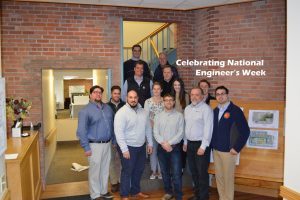 The Engineers at BME Associates are celebrating National Engineer’s Week...