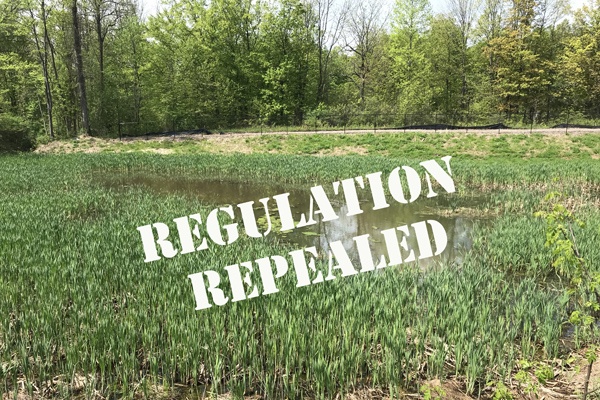 The 2015 Clean Water Rule was Repealed – what does this mean?

On Thursday, September 12, the EPA and US Army Corps of Engineers repealed the 2015 Clean Water Rule that was enacted by the Obama administration and caused the regulation of nearly all wetlands in New York State.  The repeal of the 2015 “Obama Rule” brings the regulations back to the 1986 rule which was in place previously, including non-jurisdictional, isolated wetlands.  For more information on the repeal, the EPA’s news article can be found here: EPA, US Army Repeal 2015 Rule Defining “Waters of the United States” Ending Regulatory Patchwork.

Concurrently with the repeal, the EPA and US Army have been working on finalizing a new Clean Water Rule (henceforth referred to as the “Trump Rule”) which will further reduce regulations for many wetlands and drainageways.  Based on the pre-publication rule released in December 2018, wetlands with no defined surface water connection and streams with only ephemeral flow (flow only after rain events) would no longer be jurisdictional.  There are estimates for the new “Trump Rule” being published by the end of 2019.  The new rule would then take effect 60 days after publication but will likely be challenged in court by those opposed to the rule.  Further information on the proposed new rule can be found here:  EPA and Army Propose New “Waters of the United States” Definition

This means that if you have regulated wetlands or temporary drainageways on your property, they may no longer be regulated.  This can be verified by BME and the U.S. Army Corps of Engineers.  Please be sure to contact Martin Janda or Dustin Bradley at BME with any questions regarding these new regulations and how they could affect your projects.

We are proud to announce that BME President, Peter Vars, is this year’s chosen recipient for the APWA’s Harry Swearingen Award for Outstanding Chapter Achievement and Excellent in Chapter Service!

BME Associates encourages and supports our employees in their active participation in professional associations...