Are we, or are we not subject to prevailing wages?

The Davis–Bacon Act of 1931 is a United States federal law that establishes the requirement for paying the local prevailing wages on public works projects for “laborers and mechanics” on federally funded construction projects. It applies to direct federal contracts (prime contractors and subcontractors), as well as to state and local governments expending federal (grant or loan) funds.

For years, even decades, municipalities and consulting firms working on public works projects that sub contract survey work have simply stated “this is prevailing wage” or “rate” work. The survey firm would gather the latest prevailing wage labor rates, together with the required fringe benefits for the local area and estimate the project fee accordingly.

US Legal defines prevailing wage as “a term used in a legislative effort to provide organized labor a fair chance to bid for government contracts. Federal law requires all employers engaged in the performance of federal contracts to pay “prevailing” wages to their workers. This ensures that nonunion employers cannot gain an unfair bidding advantage by paying wages far below the union rate and passing the savings on to the government in lower bids. A prevailing wage is a rate of pay determined by the U.S. Department of Labor based upon the particular geographic area for a given class of labor and type of project.”

In March of 2013, the Department of Labor reversed 50 years of precedent set by the Kennedy administration and ruled that members of survey crews are now subject to the construction prevailing wage law known as the Davis-Bacon Act. They were to be considered as “laborers and mechanics”.

Through efforts of the National Society of Professional Surveyors (NSPS) to have surveyors removed from the category of “laborers and mechanics”, the US Department of Labor responded to NSPS in an opinion letter with clarification on surveyors and payment of prevailing wages in December 2013 and has subsequently  published a Q&A clarifying when surveyors are and are not subject to Davis-Bacon.

Under Public Works, Article 8 of the NYS Constitution “workmen” are included in the definition with “laborers and mechanics”, however there seems to be express intent to limit the work to “construction like” labor.

Q: What is Public Work?

A: A three-prong test is applied to determine whether a particular project is public work and subject to the prevailing wage requirements of Labor Law § 220 and article I, § 17 of the State Constitution. First, a public agency must be a party to a contract involving the employment of laborers, workmen, or mechanics. Second, the contract must concern a project that primarily involves construction-like labor and is paid for by public funds. Third, the primary objective or function of the work product must be the use or other benefit of the general public.

As a municipal leader, are you spending more for services than you need to be?

*To learn more about NSPS and keep current with their latest news on this issue visit: http://www.nsps.us.com/

Pat Trudeau has recently passed the National Institute for Certification in Engineering Technologies (NICET) Level I and Level II exams...

10 Reasons to Join a Professional Organization. We mentor and encourage our employees to actively give back to the communities they live in, work in, and the professional organizations that help them to develop as professionals and people... 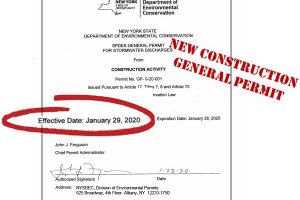 The new Construction General Permit (CGP) includes a handful of changes that may impact your operations...